Home > Plotting the future: A discussion on fintechs in Brazil

Plotting the future: A discussion on fintechs in Brazil

Brazil’s fintech industry has boomed despite the country’s economic upheaval. At LatinFinance’s 2018 Brazil Fintech Roundtable, leading technology firms took stock of the sector and looked at the steps ahead. 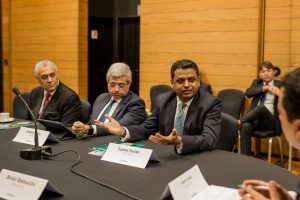 Brazil has seen a wave of growth in financial technology in recent years, spurred not just by the emergence of more than 200 fintech startups, but also by the big banks either moving to compete head-on with the upstart challengers or investing in them.

The fintech boom in Latin America’s largest economy has also piqued investor interest in fintechs with a potential to shake up the country’s highly concentrated banking sector.

Several Brazilian companies have been at the center of eye-catching transactions this year, led by payments processor PagSeguro, which raised $2.6 billion in a New York-listed IPO in January. PagSeguro’s IPO was the second-biggest in the world in the first quarter this year.

In April, Banco Inter, a small-sized mortgage lender turned online bank, completed the first IPO from a Brazilian retail bank in nearly 10 years as investors bet on technology to help smaller banks grow their customer base. More fintech companies are expected to go public in the months ahead with listings on the B3 stock exchange in São Paulo.

Yet Brazil’s big banks have not stood idle. Last year, Itaú Unibanco took a significant minority stake in the online financial services firm XP Investimentos in a deal valued at some $2 billion.

Bradesco, meanwhile, rolled out its own version of a digital-only bank, Next, in October in an effort to take on fast-growing financial technology rivals.

A challenge for big banks
While some of the new emerging fintech companies have yet to truly pose a challenge to the dominance of Brazil’s top banks, the new entrants are clearly shaking up in the industry.

“The [traditional] banks in Brazil now have a critical mission, and it’s how to reinvent themselves,” says Ailtom Nascimento, vice president at the local IT company Stefanini.

Nascimento joined executives from other technology companies that work with firms in Brazil’s financial sector at LatinFinance’s 2018 Brazil Fintech Roundtable, held ahead of the inaugural Fintech in Latin America: The Future of Finance event in São Paulo. Roundtable participants discussed the state of the digital transformation of Brazil’s banking sector, the emergence of fintechs and how traditional banks are responding to the changing landscape.

“Two or three years ago, the big banks were very closed and on the defensive,” says Antonio João Filho, vice president of Embratel, a leading telecommunications company. “They are not afraid anymore. They are making a big push to increase the fintech ecosystem and often to find ways to work with many of the new companies.”

While several big banks have sought to increase collaboration with fintechs, even inviting some to work on their premises, Brazil’s highly concentrated banking system raises potential questions about the viability of such relationships over the medium term.

Three private sector banks — Itaú Unibanco, Bradesco and Santander — and two state-owned banks — Banco do Brasil and Caixa Econômica Federal — hold more than 80% of the outstanding loans in Brazil, according to the central bank, and the banking industry benefits from healthy interest rate spreads and some of the highest lending rates in world.

“There is a lot of margin embedded in the financial sector here in Brazil,” says Sergio Paulo, CEO of Brasscom, an association of technology companies in Brazil. “Financial institutions also charge a lot of fees. These digital banking propositions are not only coming up with new interest interfaces with apps and other things, but they are also challenging current business models.”

Looking for impact
Resource IT CEO Paulo Marcelo says it remains to be seen how the big banks’ dominance will impact their working relationships with fintech start-ups.

“The question is, will they look to continue to dominate the market?” he says. “Or will they use this collaborative strategy to control the market or to be more open to share?”

Either way, the collaboration will help accelerate Brazil’s digital transformation in the near term, says Tushar Parikh, the country head for Tata Consultancy Services in Brazil.

The new digital challengers in the financial sector have been helped by encouraging policies from the central bank.

“It’s a very interesting time right now,” says Bruno Balduccini, a partner at the law firm Pinheiro Neto. “Regulators are giving a sign, saying, ‘Guys, go ahead. Come up with the technology because we want more competition.’

“I think the market has been very surprised at how quickly the central bank has addressed regulations,” he adds.

In a move to stimulate more competition in consumer loans in a country with high interest rates, the central bank in April authorized credit fintechs with a minimum capital of 1 billion reais ($254 million) to offer loans. Fintechs celebrated the decision, saying it would level the playing field to compete with more established banks.

“I don’t think it’s possible for a foreign bank to come to Brazil and to offer competition by making cheaper loans because it’s so expensive to enter the market,” Balduccini says. “So the central bank seems to be looking at technology as a way to create competition.”

Much of the growth in fintech has come during a period of economic turbulence in Brazil. According to a Goldman Sachs report published last year, there are around 210 fintech companies in Brazil, up from 54 at the beginning of 2015.

Now, as Brazil’s economy has shown signs of recovery, many industry watchers see the potential for increased growth opportunities.

“I think there is a huge opportunity,” Balduccini says. “Peer-to-peer lenders thrived during a period of recession, can you imagine what it might look like in an environment where the economy is growing?”

Encouraging outlook
The outlook for Brazil’s economy will likely be shaped by the country’s October presidential election, which remains wide open. Polls show the far-right candidate Jair Bolsonaro holding an early lead, with Ciro Gomes, the former governor of the state of Ceará, and Marina Silva, a former senator and environment minister, in contention.

“The next government has a chance to help new these new [fintech] business models which can reduce costs and create more opportunities for businesses,” Nascimento says.

Brasscom’s Paulo says he is seeing a growing awareness among Brazilian politicians and regulators of the fintech industry.

“We speak with legislators and ministers and their staff. We see they are intrigued by the future,” Paulo says. “They are actually inviting us and asking questions. They say, ‘Tell us what we need to do to help.’

“I hope the next president shares this view and makes technology a priority for the country. I also hope Congress appreciates that and moves faster to help reform our legal framework. Overall it is encouraging.” LF